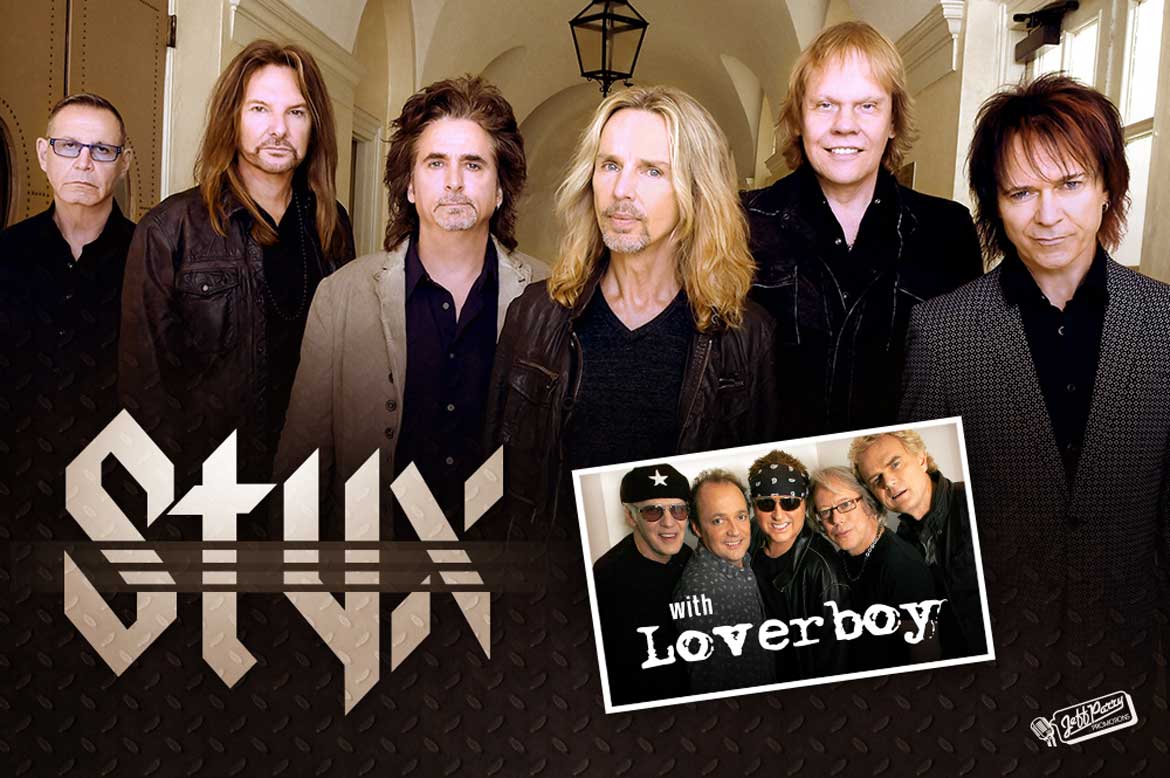 The six men comprising STYX have committed to rocking the Paradise together with audiences far and wide by averaging over 100 shows a year every year since (yes) 1999, and each one of them is committed to making the next show better than the last. Founded in Chicago in 1972, STYX has the unique distinction of being the first band in rock history to have four consecutive certified multimillion-selling albums in a row: 1977’s The Grand Illusion, 1978’s Pieces of Eight, 1979’s Cornerstone, and 1981’s Paradise Theatre.

STYX draws from over four decades of barn burning chart hits, joyous sing-alongs, and hard-driving deep cuts. Like a symphony that builds to a satisfying crescendo, a STYX set covers a wide range of stylistic cornerstones. From the progressively sweeping splendor that is “The Grand Illusion” to the hunker-down fortitude of all that is the “Blue Collar Man,” from the majestic spiritual love for a special “Lady” to the poignant rumination on the fleeting nature of fame in “Miss America,” from an individual yearning for true connection as a “Man in the Wilderness” to a soul-deep quest to achieve what’s at the heart of one’s personal vision in “Crystal Ball,” from the regal reach-for-the-stars bravado of “Come Sail Away” to the grainy all-in gallop of that rugged “Renegade” who had it made, STYX draws on an unlimited cache of ways to immerse one’s mind and body in their signature sound.

For more than 30 years, LOVERBOY has been “Working for the Weekend”(and on weekends), delighting audiences around the world since forming in 1978, when vocalist and Penticton native, Mike Reno, was introduced to guitar hot shot, Paul Dean – both veterans of several bands on the Canadian scene. After being rejected by all the major U.S. record companies, LOVERBOY signed with Columbia Records Canada to record their self-titled debut album, which went on to sell more than 700k records in Canada. Soon the band found themselves playing on mega tours with Journey, Bob Seger, Cheap Trick, ZZ Top, Kansas and Def Leppard, to name a few. They quickly became MTV darlings, being one of the first bands ever featured on the music channel.

With their trademarked leather pants, bandannas, big rock sound and high-energy live shows, LOVERBOYhas sold more than 10 million albums, earning four multi-platinum plaques, including the four-million-selling Get Lucky, and a trio of double-platinum releases in their self-titled 1980 debut, 1983’s Keep It Up and 1985’s Lovin’ Every Minute of It. Their string of hits includes, in addition to the anthem “Working for the Weekend,” such arena rock staples as “Lovin’ Every Minute of It,” “This Could Be the Night,” “Hot Girls in Love,” “The Kid is Hot Tonite,”“Notorious”, “Turn Me Loose,” “When It’s Over,” “Heaven In Your Eyes” and “Queen of the Broken Hearts.” LOVERBOY went on to win a still-record six Juno awards in 1982, and until a three-year sabbatical in 1989, were one of the Top 5 grossing touring acts in the world, performing in over 100 cities across the U.S. and Canada. Their success made them the first Canadian group ever to earn Columbia Records’ exclusive Crystal Globe Award, celebrating the sale of over five million albums outside their native country.

Along with Reno and Dean, LOVERBOY still includes original members Doug Johnson on keyboards and Matt Frenette on drums, with Ken “Spider” Sinnaeve (a former member of Dean and Frenette’s pre-LOVERBOY band Streetheart), replacing the late Scott Smith on bass, and continues a healthy touring schedule around the world.